Sunderlands are thrilled to announce a terrific show and sale at their annual Christmas Fatstock, in fact it was an absolute bonanza with a superb entry of 1431 Fat Lambs, 277 Cull Ewes and 7 Prime Cattle. The quality of sheep and cattle on offer was outstanding and a credit to every vendor forward. The quality of show lambs forward were second to none and the judges had the difficult task of selecting the prize winners. Eventually the overall Champion pen of lambs were awarded to Messrs Eckley of Fforddfawr Farm, Glasbury and the Reserve Champion pen was awarded to Messrs Lewis of Maesgwyn Farm, Llandefalle. The Champions soared to £115 per head, the Reserves made £107 per head and both pens were purchased by the judge Mr. Dan Beavan of Beavan Family Butchers, Abergavenny. Sunderlands would like to thank both judges, which also included Ms Geraldine Like of C.J. Gibbons Butchers for their sterling efforts. 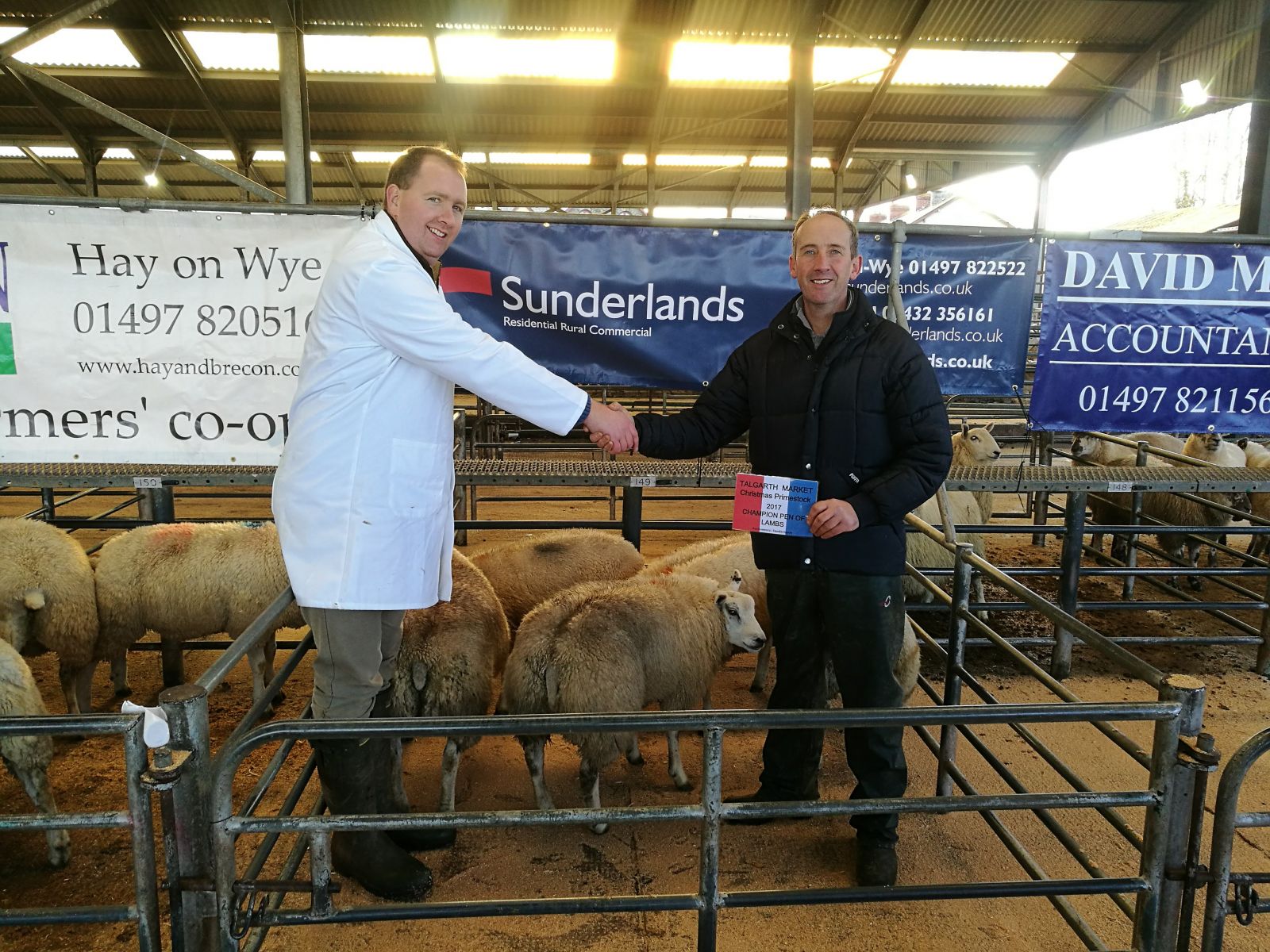 The show sheep were a phenomenal trade from start to finish with pen after pen in excess of £100 per head! This without a shadow of a doubt is the best trade for show sheep ever witnessed at Talgarth Market and the trade followed through into the commercial section. An overall average of 186p/kg was attained on the 39kg to 45.5kg weight bracket, with lambs soaring to 282p/kg. Pen after pen were in excess of 190p/kg with a pen of 45kg lambs in the commercial section from Mr. I.J.L Havard, Tregoyd Farm soaring to 220p/kg or £99 per head. All weights were in particularly strong demand today with a significant lift to the lightweights (28kg to 38kg) which averaged 180p/kg. Those 50kg plus lambs were also a better trade selling up to £90/hd. Any amount of those 44kg to 47kg lambs selling between £80 and £86/hd.

The best pen of Young Farmers Lambs went to Mr. James Cole of Maesgwyne Farm for a pen of 43kg lambs that soared to £103.50/head and were purchased by Weekes Wholesale Meats.

The full schedule of show results are available in our weekly market report via our website. 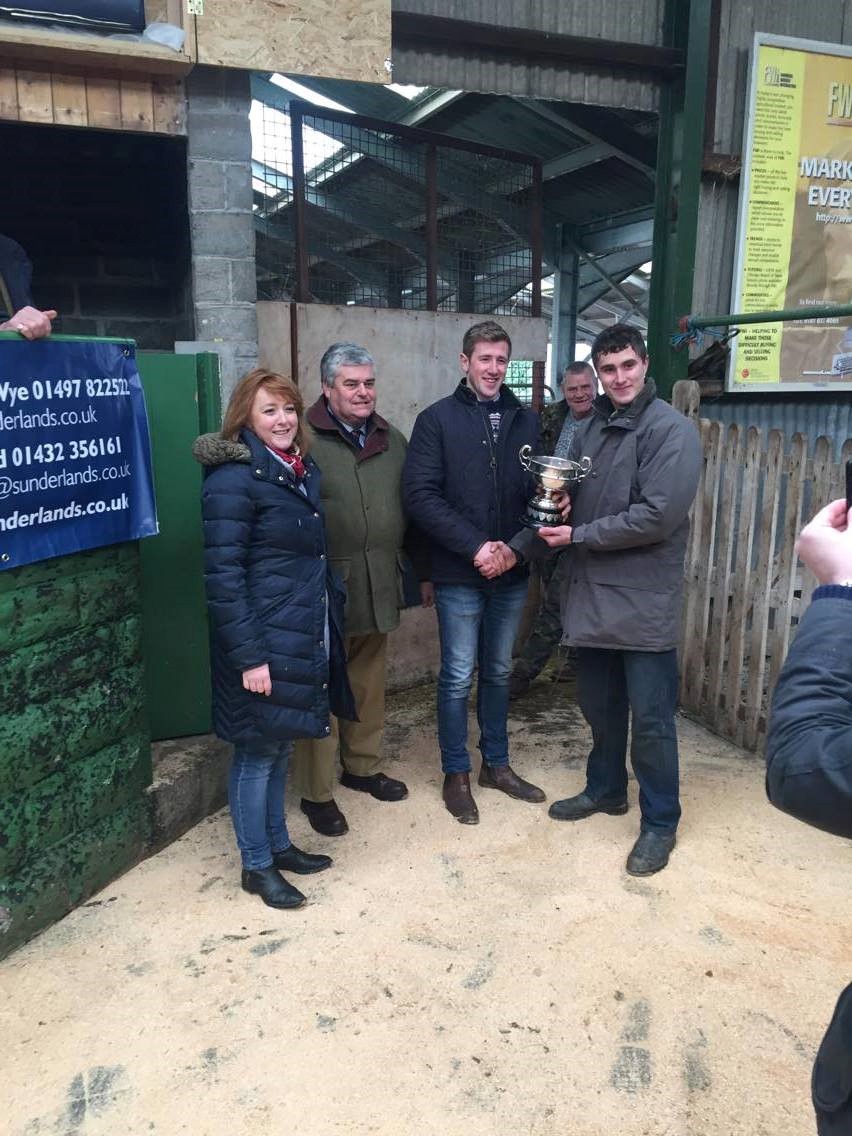 We had a lovely show of prime cattle for the beef section with the overall championship awarded to a superb red Limousin heifer from Messrs Price Bros, Tyleheulog. The heifer was shown by Terry Price and his daughter Becky, but with proceedings overseen by John Price so a real family affair! The heifer was eventually purchased by local butcher Mr. Brian George of W.J. George Butchers of Talgarth, who have been supporting Talgarth market for generations. The heifer was purchased for the princely sum of £2600.

Reserve Champion was presented to a heifer from Messrs Eckley, Fforddfawr, another terrific supporter of the market and she made £1480 and was purchased by regular buyer Mr. Ian Sevenoaks on behalf of Week’s Wholesale Meats who also purchased a significant number of prize winning lambs. 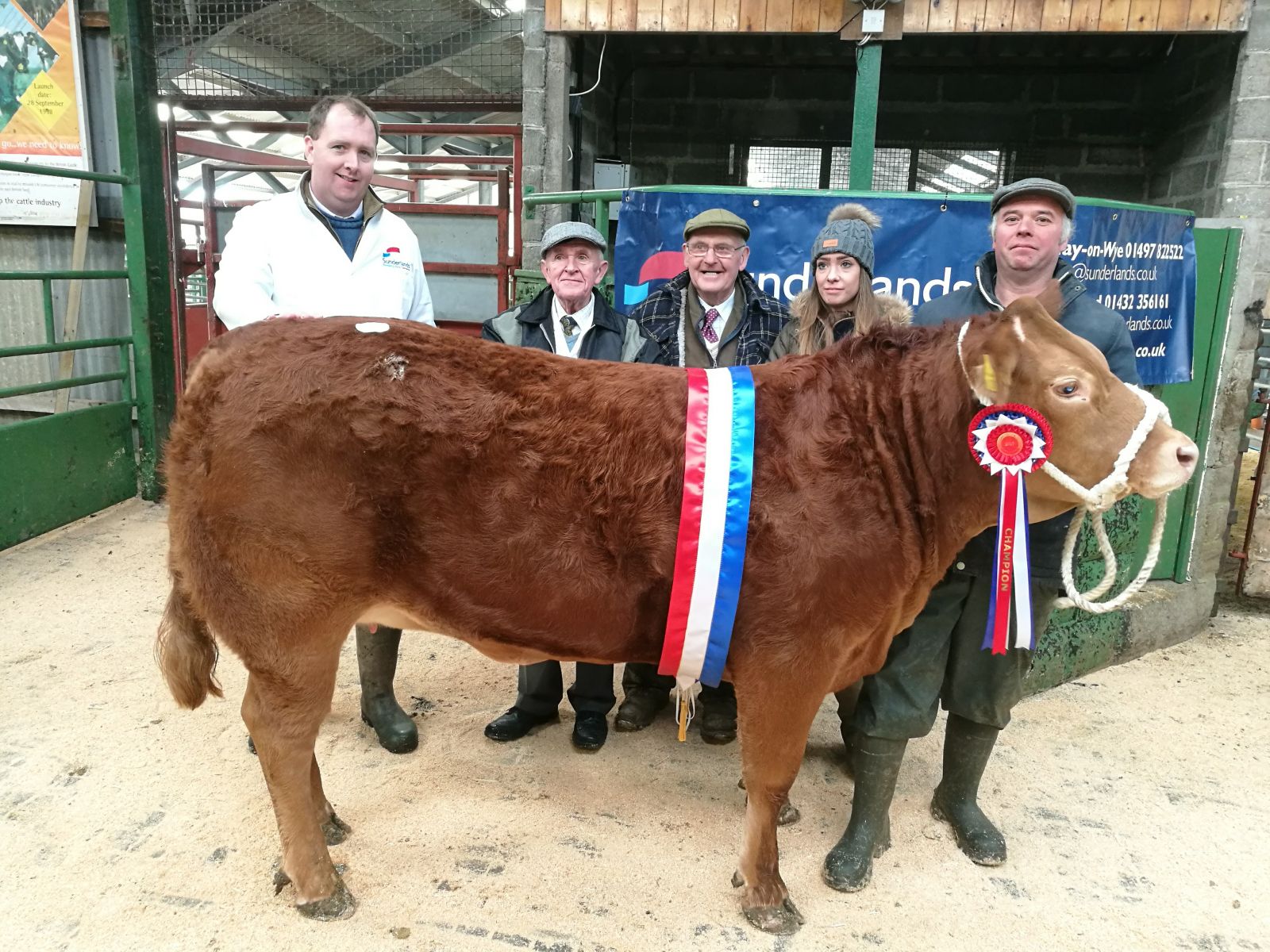 Today was also a significant day in terms of history. This year marked Graham Baker’s 60th anniversary year with Sunderlands auctioneers. It was in 1957 when Graham first started attending Talgarth Market, who still now continues to work as a consultant for the firm. Mr Lewis Edwards of Maesgwyne Farm, a lifelong friend of Grahams has also been attending, supporting and showing at Talgarth Market from the same period and it was great to see him still showing and winning prizes here today along with his grandson, James. Today also marked the 40th Anniversary of when Mr. John Price and his late brother Cliff, first won the Championship at Talgarth Fatstock, which was then purchased by Mr. Brian George’s father. 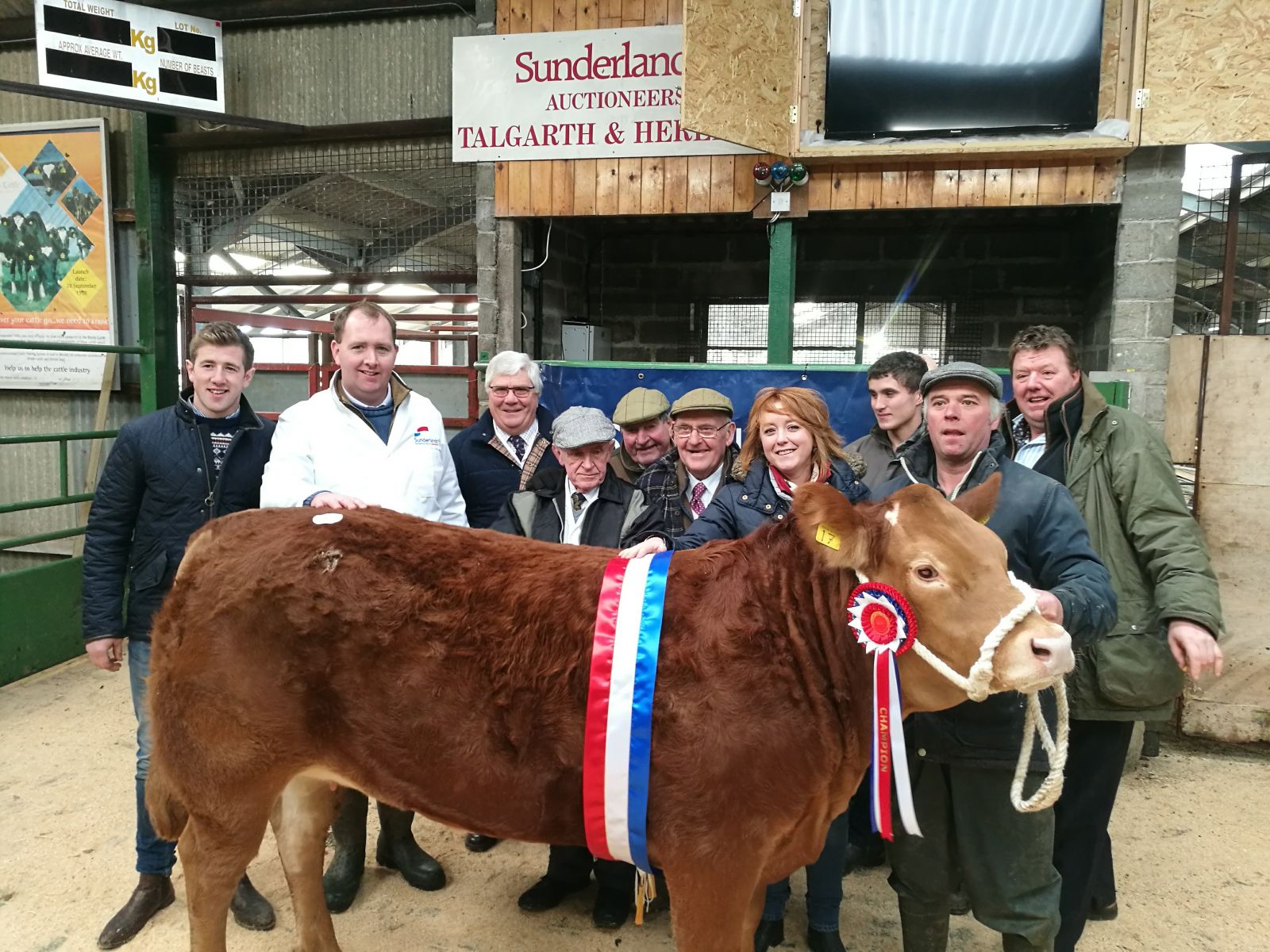 Sunderlands would like to take this opportunity to thank all vendors and buyers for their continued weekly support and as auctioneers we will continue to make every effort to make sure it is reciprocated! We would also like to thank all of our sponsors today and wish all our clients the very best for 2018!